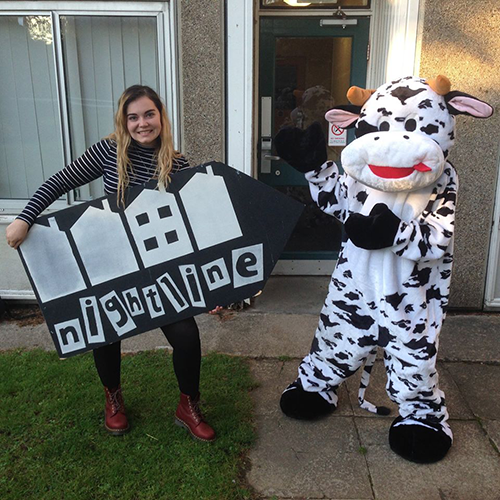 There’s a chance you’d recognize their infamous ‘Kevin the Cow’ mascot if he passed you in the street, but would you recognize MBiol Biology student Paige Street? Probably not.

This is because Paige was an ‘anonymous’ listener for YUSU’s volunteering project Nightline for three years, working regular 12 hour shifts overnight actively listening, supporting and chatting to students from both the University of York and York St John - all whilst keeping it a secret from friends.

York Nightline began in 1972, with the nationwide service being established only two years prior. York, along with its sister services up and down the country, has supported over 1.5 million students in over 90 UK universities during that time.

‘We work in a similar way to the Samaritans’ says Paige over a coffee.

‘We are an ‘active listening’ service which means we can chat with and support students by being a friendly voice, but we aren’t trained counsellors so we don’t ever offer advice or signpost students to other services.’

Paige says this could be a common misunderstanding students have about Nightline, along with the idea that the service can only be used by those in distress.

‘You don’t have to feel sad or distressed to use Nightline. We’re there for anyone and everyone - regardless of how they’re feeling or their individual situation.

‘You can call us whilst you walk home and fancy a chat, or even if you just watched a great episode of Breaking Bad and want to tell someone about it! You don’t even have to phone us. You can come into our flat in Grimston House for a chat, instant message or email us.’

In addition to listening, Nightline also offers sexual health supplies and other resources such as information and personal alarms.

It’s obvious that Paige deeply cares about the students in York, but during our interview we found out that that wasn’t the only reason she got involved . . .

Why did you decide to volunteer for Nightline?

I actually got involved because I struggled in my first term of university with exam stress and generally it was just a bit of a culture shock to me. I was lucky that I had a good support network but I know not everyone does. I wanted to get involved in something that could provide that support for those who needed it.

So a shift with Nightline is 12 hours long - that seems like a long time!

It is a long shift, but you’re never doing it by yourself as calls are usually taken by two volunteers. You have a great sense of satisfaction afterwards which makes it worth it, too.

Also Nightline only asks that each volunteer commits to a minimum of three shifts per term so you can choose ones where you know you have time to sleep it off the next day!

So you were an ‘anonymous’ listener - what does that mean?

It means that I couldn’t tell anyone that I volunteered for Nightline, which I did for three years out of my four-year degree. The service is confidential and anonymous, for both the callers and the listeners, so if people found out who they were talking to it could put people off using us.

You couldn’t tell anyone?!

Well, we could tell those who Nightline defines as ‘essential’ people, so my housemates knew. We could tell anyone who would notice and panic if they thought we’d gone missing for 12 hours!

But I didn’t tell a lot of my friends which was difficult. That was probably the hardest part of the role, as I’d have to sometimes bail on nights out but couldn’t tell them why. It was quite funny when I finally revealed my secret!

What happened when you finally ‘came out’ (a term used by Nightline volunteers when they reveal that they have worked as an anonymous listener)?

When I ‘came out’ it was great to see how many people cared about the service. I had people from my course that I hardly knew coming up to me and saying ‘well done!’.

When you’re working anonymously you have to remind yourself that the work you’re doing is good and is benefiting students. It was nice to have that feeling reaffirmed by others.

Do you have any advice for anyone who is considering volunteering for Nightline?

Go for it! They run taster sessions each term, so go along to those and see what you think. You don’t have to be an anonymous listener either - you could become a volunteer helping with fundraising or publicity, too.

Nightline is a funded and supported by YUSU, and you can find out more about the service here or by visiting their website.

One to Watch: Lacrosse