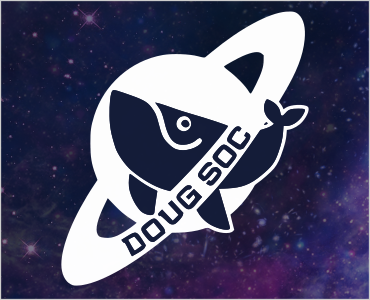 Trailing at the end of the unfashionable spiral arm of the Milky Way Galaxy is a small yellow sun that is orbited by several masses variously known as 'asteroids', 'planets', and 'still a planet, fight me'*. One of these masses was known by its inhabitants as Earth. On this Earth, there once lived a man called Douglas Adams.

Elsewhere on this Earth, there was the University of York, and a small group called The Douglas Adams Society, who claimed that the best way to celebrate the life and achievements of Douglas Adams, was to run around the university campus covered in cardboard, carrying inflatables, searching for abstract concepts, holding competitions with highly original prizes, warning people to be careful of the kraken that lives in the lake***, playing boardgames, discussing proper brewing techniques for tea and other pop culture, and reading a weekly newsletter called the 'DougInfo', rather than hosting lectures or seminars on his life works or something. Each week it's something different! Sometimes it's a treasure hunt. Sometimes its Cardboard Robot Wars. Sometimes its just watching a terrible, terrible movie. The weekly events will posted on our Facebook page.

This is that Society.

*Views on planetary status within the Society vary, and you will find people who may agree or diagree with you, I do not speak for all Douglings**
**So you should join so you can meet kindred spirits, and so you can fight me.
***His name is Bob and you should be nice to him.

We meet every Tuesday during term time at 8:00pm, where you can chat to the rest of the society members, before we to start our weekly event elsewhere on campus at 8:30pm.

Anybody is free to come along to two Dougsoc meetings before getting membership, to get a taste of the society's sense of excitement, adventure, and really wild things! Just meet us on Tuesdays at 8pm.

A weekly email detailing the upcoming events is sent out to anybody on our mailing list. Speak to our Chair or Secretary and we'll gladly sign you up.